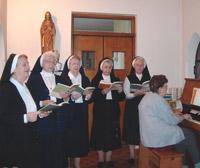 The Sisters of Mercy

The Sisters of Mercy are a group of religious women who live in the community and dedicate their lives to God by vows of poverty, chastity, obedience and service. In keeping with the Gospel teaching, they try to promote human dignity and social justice. Their mission is to proclaim the Gospel joyfully in diverse ministries – teaching, nursing, care of the elderly, care of the homeless and working in parishes to help people develop their spiritual lives.

The House of Mercy, Edwin Street, Gravesend, became a registered charity in 1991 to provide hostel accommodation, support and a positive future for single homeless people.

Due to an increase in the number of homeless people calling to their convent for food and clothing, the Sisters of Mercy Gravesend decided to establish a project for single homeless people. Having looked at many properties in the town centre, they eventually leased a house in Edwin Street from the Archdiocese of Southwark.

The sisters invited a male Religious Order, the Presentation Brothers, to join them in the project at both a personal and financial level. A voluntary Management Committee was formed, staff appointed and the project opened as both a hostel and Day Centre in 1992.

Since then and thanks to the generosity of the Sisters of Mercy, two further hostels were opened and there are now three Hostels which have a total accommodation for 22 residents who can stay for a period of up to six months. The residents have the opportunity to work with the hostel staff who will assist with housing support needs. 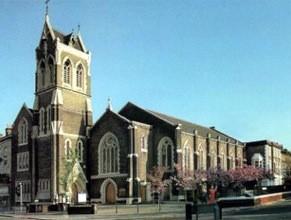 The Parish of St Johns

The church of St John the Evangelist had been built in 1834 as an Anglican proprietary chapel dedicated to St John the Baptist. The cost was £7,200 and the architect was William Jenkins. It was built by 100 shareholders who each subscribed £50. However, the company was soon in severe financial difficulties as the pew rents did not yield the expected returns, and by 1838 it was unable to pay the incumbent’s salary. It was decided to sell St John’s church but an offer by the Diocese of Rochester was turned down.

In August 1842 the church together with its furnishings and fittings was sold to the Rev. William John Blew, an Anglican curate at St Anne’s, Westminster, and a High Church clergyman in sympathy with the Oxford Movement. He continued his ministry at St John’s until 1851 when he was suspended by the Bishop of Rochester because of a sympathetic letter Blew had written to Cardinal Wiseman. Blew then proceeded to sell the church to Cardinal Wiseman for the sum of £4,000. Half of the sum was provided by Lewis Raphael of Parrock Manor who had attempted to buy St John’s for the Catholic Church as early as 1838. After some alterations, the church re- opened on 30 October 1851 when Bishop Grant dedicated it to St John the Evangelist. Cardinal Wiseman gave the sermon at the opening service. In 1869 a purpose-built presbytery was erected in Parrock Street.

In 1858 George Matthews Arnold (1826–1908) was received into the Catholic church. A solicitor and eight times mayor of Gravesend, Arnold was a major benefactor to the parish at Gravesend. He restored three medieval churches in the area and presented them to the Church. Only one of them (St Mary’s, Denton, q.v.) is still in regular use, as a chapel of ease. At St John’s he paid for the removal of the galleries and donated the altar rails and (probably) paid for the altars in the Lady and Sacred Heart chapels; these were designed by F A Walters, from whom Arnold commissioned work at Denton and elsewhere (Walters’s drawings are deposited in the RIBA Drawings Collection, ref PA1153/3). After his death, Arnold bequeathed 100 acres of land at Denton, of which 72 acres were sold and the remaining 28 acres became the site of the parish schools.

Originally, the church had no tower, only a small bell turret. The present tower was added in 1872-73 by Goldie and Child. The church was consecrated on 22 May 1894 by Bishop Butt, who had been the parish priest at Gravesend for nine months in 1851. At the same ceremony, the two side altars were blessed. The original gallery running around three sides of the interior was removed at some point after 1860. This led to structural problems and in 1912 six pairs of wrought iron columns and wooden beams with steel cables were added to support the ceiling. Around the same time a choir gallery was installed at the west end.

In 1860 the Sisters of Mercy arrived in Gravesend, who staffed the parish school and organised the building of classrooms, which probably included the two buildings now used as halls. In 1925 the Sisters of Charity came to work with the children of the Southwark Catholic Children’s Society. From 1960 to 1980, the Carmelite Sisters of Corpus Christi looked after the residents at the St Joseph’s Old People’s Home, Shorne, which has since been run by the Sons of Divine Providence.

For the church’s centenary in 1951, the tower and parapet were repaired and the stonework renewed with Portland stone. In 1960 the interior was restored, including the installation of a Rhodesian teak floor, confessionals and pews of English oak, the restoration of the sanctuary, the removal of the sanctuary side screens, and the addition of new doors to the sacristy, the main entrance and the porch. In 1969 an organ was purchased from St Patrick’s, Plumstead (also a former Anglican church).

The church faces south; however, this description uses conventional liturgical orientation. The church was built in 1834 by William Jenkins Jun. as an Anglican proprietary chapel. In 1851 it was converted for Catholic use and in 1872-73 the tower was added by Goldie and Child. The original galleries on three sides of the interior were removed after 1860. Resulting structural problems were addressed in 1912 by the insertion of wrought-iron columns and wooden beams encasing steel cables.

The church was built using Suffolk brick laid in Flemish bond (English bond on the tower) with stone dressings and a slate roof. The plan is rectangular, consisting of an aisled nave with a shallow canted apse, a narrow west porch with northwest tower, and a sacristy to the northeast. The west front has a four-light geometrical tracery window above the west doorway. The tower projects forward, beyond the west front. It has angle buttresses and a saddleback roof. The lowest of its three stages has a row of four lancet windows, followed by two plain lancets further up. The top stage is the most ornate: two traceried windows with bell louvers and a canopied statue on the gable. (The three-storey building beside the tower in a similar early Gothic style used to house the parish school.

There are doorways at the west, and the southwest corner, as well as a disused door at the west end of the south aisle. The narthex at the west has a plaster rib vault, a crucifix, a First World War memorial plaque and the stair to the organ and choir lofts. A glazed timber screen leads into the nave. Seen from the nave, the organ loft projects forward, while a triple arched screen above divides it from the choir loft inside the upper floor of the west porch.

Below the organ loft is a painting of St John Fisher, a plaque for the St Mary’s Old Boys who fell during the Second World War, a brass plaque listing all parish priests and curates, and a brass memorial to Elizabeth Cotton Arnold, wife of George Matthews Arnold. At the west end of the north aisle is the repository. Above it is a twin opening, probably part of the staircase to the lofts.

Following additional supports of 1912, the roof is a complex structure, with bracing on top of the wrought-iron columns supporting the tie-beams. The columns and the timber arches they support create aisles which are nearly as high as the nave. The interior has six bays, of which one bay at the west contains the organ gallery and half a bay at the east is part of the sanctuary.

The north aisle has three stained glass windows depicting, from the east (with two lights each): the vision of the Sacred Heart and St Mary Alacoque (1880s, as a thanksgiving for preserving the church from fire on New Year 1881); the Annunciation (1880s, in memory of John Charles Priddle); the Vision of Our Lady in Rev. 12.1 (in memory of Anna Regina Jackson, d. 1889) and a charitable scene illustrating 1 John 4.21 (in memory of John Feilde Jackson, d. 1885), both c.1889 and attributed to Lavers & Westlake. There are two confessionals in the north aisle. Below the Annunciation window is the entrance to the sacristy.

Walters’s wrought iron altar rails to the sanctuary - bearing the IHS monogram and St John the Evangelist’s eagle - have now been placed in front of a row of chairs in front of the nave’s benches. The sanctuary’s five-sided apse has a plaster rib vault. The three windows in the apse are (north to south): St Edward the Confessor and St John the Evangelist (1881, Worrall & Co); Christ and the Virgin (1850); St Joseph and St Michael (1881, Worrall & Co). The sanctuary furnishings are a set of 11 pieces made from bogwood by the Irish sculptor Michael Casey. The pinnacled reredos has mosaics of four saints made by Belgian craftsmen in 1926. The high altar’s frontal depicts the Betrothal, Nativity and the Flight into Egypt.

The southeast chapel is dedicated to the Virgin. It has an altar by F A Walters with columns, wrought iron rails, a statue of St Anthony, and a reredos similar to that of the Sacred Heart chapel with a statue of the Virgin. Nearby is a door to the presbytery.

The south aisle windows depict the Calling of St Peter and St Andrew, with St Joseph and St Agatha below (attributed to Lavers, Barraud & Westlake); and Jesus preaching to the disciples, with St Francis and St Elizabeth below (attributed to Lavers, Barraud & Westlake). The Stations of the Cross are carved and framed reliefs. At the west end of the south aisle is a row of three short windows, directly below the main window, beside a statue of Our Lady of Lourdes in the corner.